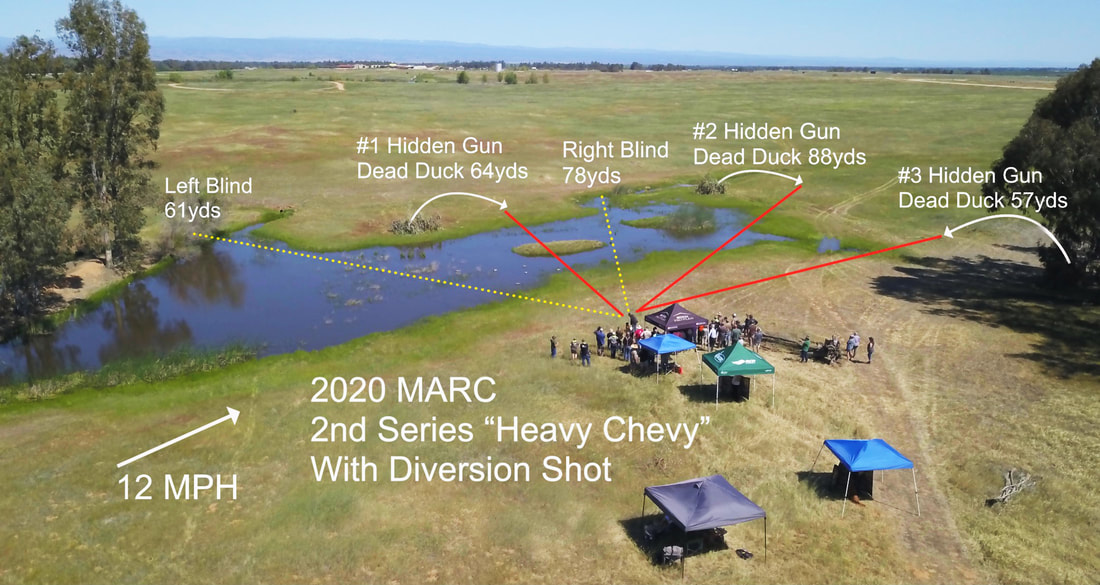 This test is named for the fact that a junked out car had lain half submerged in this pond for several years before being hauled off.

The Second Series is a triple thrown with three dead ducks. The first and second birds are thrown from well brushed up blinds. They land across water on the other side of the small pond. The last bird down is thrown by a thrower hidden behind a tree and the route to it is land only. There is a diversion shot as the dog returns from the left hand mark. After all marks are retrieved a double water blind is run.

After the marks are retrieved there are two water blinds. Handlers are instructed to run the left-hand blind first. The left hand blind is planted at the base of the dam that holds the pond and the line to this blind is past a point. A ribbon hanging from an overhead tree marks this blind. The blind planter is hiding on the far side of the dam.

The right hand blind is tucked into tules at the edge of far shore and is marked by an orange marker. The line to the blind trims past the corner of an island and goes up a slot. This blind is planted from the middle throwing station.

The judges have emphasized the importance of challenging the line to both of the water blinds.
Test Dogs for Series 2:
Gamay and Susan Bell were the first test dog team. Gamay made three clean retrieves on the triple. Her line to the left blind was off to the right, landing early on the right hand point, from which area she was handled into the scent cone to wind the bird. Gamay was kept on a good line to the right blind but missed the bird in the tules on the shore and would not handle back towards the pond, responding to most come in whistles by running farther away from the pond. Susan used verbal reprimands to get Gamay to the blind.

After Gamay completed the test, the judges advised that her job on the left blind did not acceptably challenge the line and would not have been carried.

The judges then pointed out a culvert emerging from the hillside on the right side of the blind. They advised the handlers that the judges felt the area below the culvert was not safe if a dog were to run into it. They said that if dog was in that area the handler was instructed to pick the dog up to avoid a safety issue and that dogs that got into that that area were not running a passing blind anyway.

Julie and Piper were the second test dog team. Piper made a clean retrieve on the right and left birds. On the middle bird she skirted around the right hand corner of the pond, which took her too high on the hill and deep of the fall. She was handled to the bird, requiring several whistles. On the left blind Piper took a good initial line and stayed on line needing only one whistle to complete the retrieve. On the right blind Piper carried a good line into the slot where the bird was placed, but missed the bird (that was tucked into the tules) on the upwind side and several whistles were needed to convince Piper to come back to the water's edge where the bird was. Her ability to see her handler was impeded by the presence of the gallery.

Ed and Rye were the third test dog team. This team demonstrated the hazards of this test when run in a left-to-right quartering wind. Rye scooped the go bird on the right. After being sent for the middle mark she winded the left hand mark. Ed attempted a handle but Rye retrieved the left hand mark anyway. Rye was sent again for the middle bird but hunted deep. While being handled by Ed, Rye winded - then retrieved - the right blind which had been planted prematurely. On the left blind Rye took an initial line to the left of the blind but was quickly handled onto the correct line for a good job. On the right blind (planted again) Rye took a perfect line up the slot to the bird.

The judges reiterated their earlier observation that dogs in the area of the culvert on the hillside must be picked up by their handlers for safety reasons and because the dog had failed the blind.​

​
Sunday, April 18, 2021:
The second series ran on the other side of the road from the first series, requiring no moving of cars. The set-up crew timed the second series at 7 minutes a dog. At this rate it would take ~ 8 hours and 50 minutes to run all 72 dogs on the second series. The judges announced that whatever dog was coming to the line at 7 p.m. would be the last dog to run on Sunday, and remaining dogs would run Monday morning.

NOTE: Test dog Piper was substituted for Bree starting in this series, as Piper was getting close to coming into season.


Monday, April 19, 2021:
With afternoon temperatures now in the high 80's, many thanks to the hard-working volunteers who have stepped up run the wingers and plant the blinds on this Series.

Many dogs had strong work on the Second Series. A few, however, demonstrated that Sunday's three Test Dogs did not find all the ways to get in trouble on the Second Series. The middle mark seemed to give the most trouble, with some dogs hunting short while others went too deep into the meadow that had "nothing in particular to mark off of" while looking for this bird. There were dogs who switched from the middle mark back to the go bird on the right. Due to rough work on the marks a small number of handlers "got the tap" and the blinds were not planted. One dog was asked to pick up for being too close to the culvert, a situation the judges had warned about during the Sunday afternoon scenario for this series.
​
2ND SERIES COMPLETE – The final dog to run the 2nd series was dog # 63, completed testing at 1:40 p.m. 42 dogs ran on Monday, the previous 30 having completed on Sunday. The Third Series is being set up to the north of the First Series, and will be run from the same parking lot.  The crew is setting up for the 3rd series to get started today also.