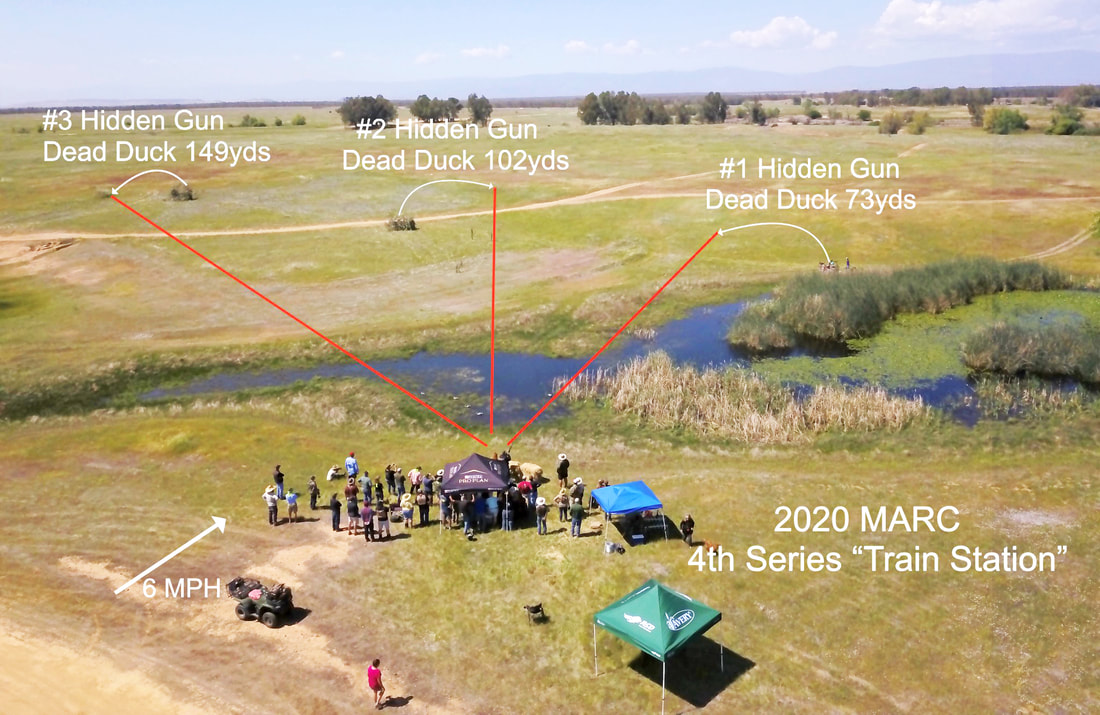 Series 4 Test Description:
Triple marking test with dead ducks, no blind, no honor, dog sits remote for marks. This test is predicted to be a tough one, hence the test name "Train Station" (someone "got taken to the train station," a line from the TV series Yellowstone).

It's a duck hunt and you are hunting out of a blind that is fashioned from a double stack of hay bales set in a square, with an opening at the back for the handler to enter after positioning his dog in front of the hay bales. The dog therefore "sits remote" and the handler stands behind the hay bales while the marks are thrown. After the birds go down, handlers can choose to leave the hay bale blind to send their dog from their side or stay in the blind and send remote. A dog that is confused by a remote send will be considered confused and can be sent again, according to the judges when responding to a gallery question.

A small spread of mallard decoys floats in the shallow water in front of the hay bale blind. The line to the right and middle birds goes through these dekes. Several individual branches - standing up in the air - have been staked into the ground in locations along the line to the middle fall. Are these man-made trees "goal posts" for a perfect line?

The right hand bird lands in meadow grass a little ways up on shore - this throwing station is hidden by thick tules on the right. The line to this bird is through a fringe of tules. The middle bird lands on the far side of a dirt road - this throwing station is a brushed-up blind. The left hand bird, also thrown from a brushed-up blind, lands in front of a grass-covered mound of dirt surrounded by meadow grass. This is a long mark at 149 yards.
​Series 4 Test Dogs:
Susan and Gamay were the first team to tackle this duck hunt. Susan attempted a remote send ... for which Gamay remained solidly steady. Susan then left the hay bale blind to send from her side and Gamay took off for the bird. Gamay did not carry the angle and the distance needed for the left hand bird and retrieved the middle bird after a short hunt on both sides of its throwing station. Gamay was then sent for the right hand mark, took a wide line farther left than ideal, following up with a hunt farther to the left and approaching the middle station. Gamay popped very briefly and un-popped, then rapidly worked things out to find her bird. When sent again for the left hand bird, Gamay took a line towards its throwing station then worked to the left for a quick retrieve.

Ed and Rye come up next for the duck hunt. Ed did not send remote, electing to leave the hay bale blind and give Rye a line to the go bird on the left. Rye headed for its throwing station, hunted to the "back side" of the station but worked her way to the bird without difficulty. Ed sent Rye for the middle bird second. After leaving on a good line Rye established a hunt somewhat short, then worked back and forth on both sides of the throwing station as she worked her way to the other side of the road to find her bird. On the third retrieve (the bird on the right) Rye took a perfect line through the fringe of tules to pin this bird.

Julie and her replacement test dog, Bree, were the final test dog hunting team to go hunting here. Bree was a handful at first before being convinced to sit remote. Julie, like Ed, elected to leave the hay bale blind and send Bree from her side for the go bird. Bree took a great line to this bird for an accurate mark. She also had a good line to the middle bird, for which she was sent second, but commenced a quartering hunt before crossing the dirt road. She worked her way to the left - towards the fall of the middle bird - and Julie handled. Bree was then sent for the right hand bird, which she pinned.

14 dogs are running the this morning to complete this 4th series.

The powerful north wind this morning created a severely crosswind test for the 14 dogs that ran the 4th series this morning. This weather change demonstrated why it is generally better to run a split series on its first day!

The wingers were adjusted as much as possible but even with modifications the middle throw now often fell behind the holding blind and had no arc at all. However, its location was still readily apparent to the dogs with their keen noses.

The last bird down in this test is the longest bird, and it was also the most downwind bird today, with the two shorter memory birds being upwind of the “go bird.” It was not uncommon for a dog that had a hunt on this bird to wind the middle bird on the right, calling for a handle, and these handles were sometimes rugged ones, given the strong wind. Any dog sent for the middle bird before the right hand bird invariably winded the right hand bird and diverted to it. Generally this occurred well before the area of the fall for the middle bird, so the jeopardy for the team in this case was that a dog when sent again for the middle bird could think it had already been there and try not to go there “again.”

Only one handler used “primary selection” to take the birds in order of the wind: right, middle, left.

4TH SERIES COMPLETE – The 4th series is now complete, the last running dog came off the line at 9:10 am.
The crew broke down the equipment quickly to transport it to the site of the new 5th series. The plan for which of the remaining tests to run where, had to be modified today because of the strong north wind. The original plan was to run the 5th series - which has two fliers in it - today and finish with a test at the “clubhouse pond” tomorrow. But now the former 6th series will become the 5th series and vice versa! The parking lot is moving for the 5th series. Callbacks to the 5th have been posted!