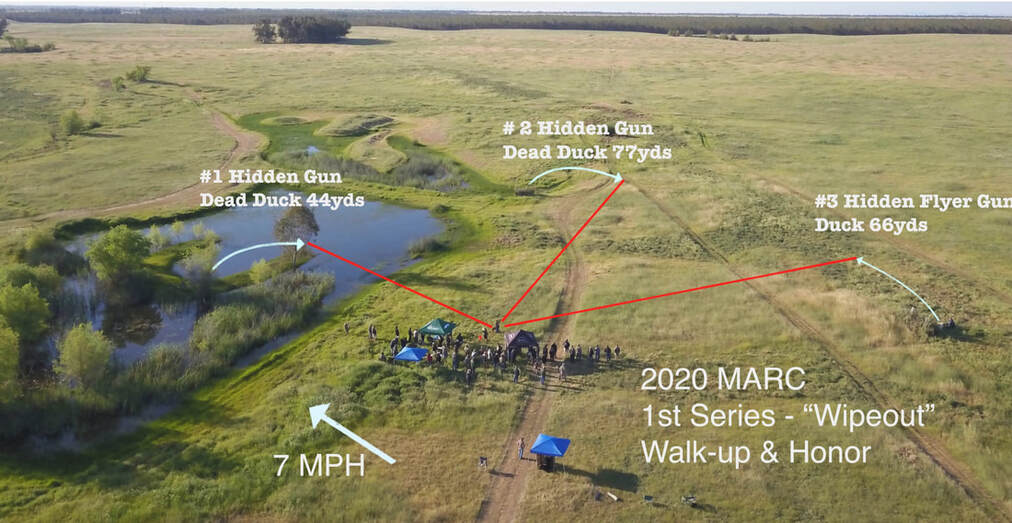 This test is called "Wipeout" due to unfortunate set-up worker Bruce Hayes who tipped over his boat during set-up, landing in the pond.

The scenario is: You are hunting and have your dekes (goose silhouettes) already in place. You went to get your dog and are heading back to hunt. A duck flushes out of the pond on your left, heading to the right. You shoot it. It lands in the pond or on a point in the pond at ~ 44 yards. Another duck flushes in front of you launched from left to right, and is shot, landing at ~ 77 yards. Then a third duck circles around, flying to the left, and is shot at ~ 66 yards. This one is a real flyer.

So it's a walk-up with the birds going down left, middle, right. It is a wide test with almost 180 degrees between the first and third birds. All birds are launched from wingers and the launches are preceded by duck calls from the throwing/gunning stations. After delivering all birds (dropped in buckets) there is an honor on the left.

The land terrain is a mix of long green grass, heavy vetch cover, and ATV trails.

This test was estimated at 3.3 minutes during set-up.

Judges took questions. Handlers may use their own handler gun. The MARC line gun will be sanitized between each handler. Handlers may move up to higher ground (recommended by the judges) to watch the dog working the flier but not beyond the ATV trail. This is a game preserve and planted chukars are on the grounds. If your dog flushes one, handle as needed. It will be considered a "free handle" but must be a good quality handle. There will be a second bird bucket at the honor box but if you want to take delivery of your final bird at the running line that is okay too.
Test Dogs for Series 1:
The first test dog was Gamay, handled by Susan Bell. On the flier Gamay went out of sight almost immediately, and Susan's comment about visibility led to the judges' recommendation that handlers move forward to higher ground during the retrieve of this bird. On the second bird (pond bird on the left) the spread of goose dekes may have pulled Gamay off her initial line but she quickly corrected and this bird was retrieved without difficulty. On the third bird (long bird up the middle) Gamay appeared influenced by an ATV trail that headed under the arc of this throw. She "wrapped" the throwing station to the left, then worked beyond a band of heavy vetch cover which put her hunt somewhat deep. Her hunt, not all of which was visible, eventually carried her back to a position perilously close to the flier. Susan handled quickly and successfully.

The second test dog was Piper, handled by Julie Cairns. Piper brought back just a wing on the flier, earlier fliers having been shot at close range. Piper - like Gamay - went for the left hand (pond) bird second. Once in the pond Piper turned suddenly and sharply to the right, leading her away from the fall and Julie handled quickly. Piper took a good line to the middle bird, which she retrieved last, and located it quickly without a hunt.

The third test dog was Rye, handled by Ed Ryska. Rye made quick work of the flier (the flier flights were becoming longer). Rye was sent for the middle bird second and, like Piper, headed under the arc and wrapped the throwing station towards the left which pulled her away from the fall. Rye hunted deep on this bird and showed the gallery there is a lot of cover to bounce around in as she worked her way to the bird. Rye's final bird (pond bird) fell in open water where Rye pinned it.

Our three test dogs gave the participants a good picture of some of the influences in this test.
​

1ST SERIES COMPLETE – The last dog for the 1st series ran at 1:30 pm. The crew is setting up for the 2nd series to get started today also.