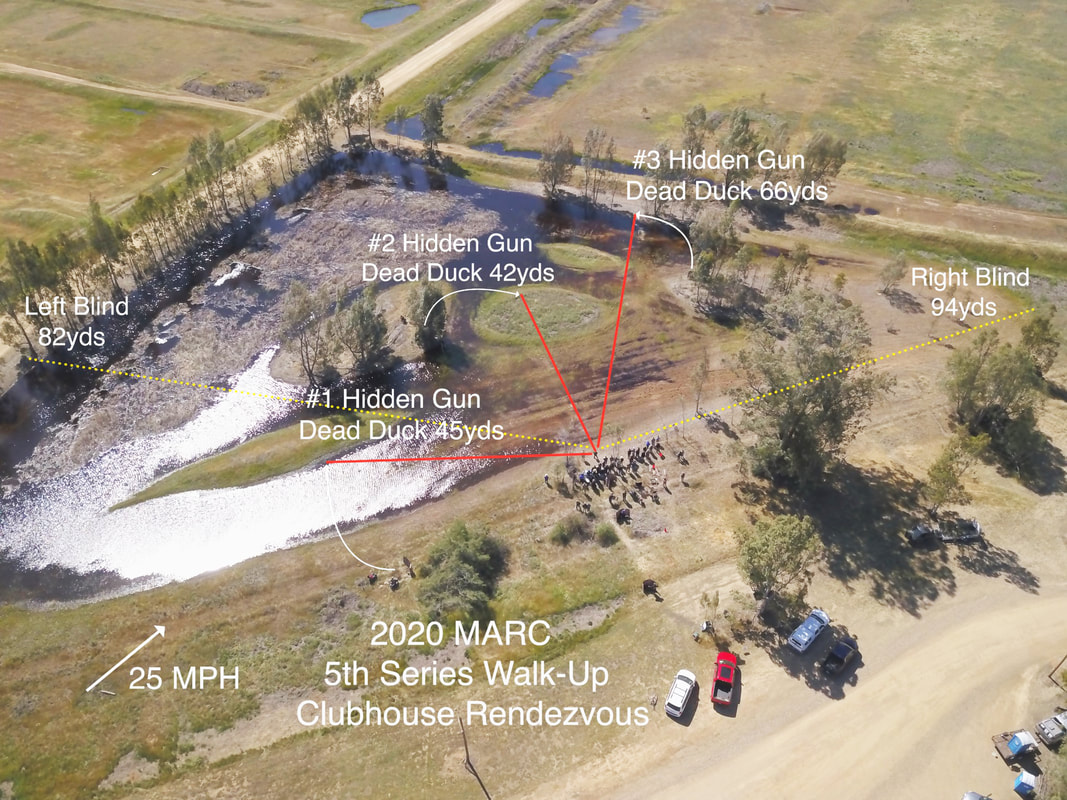 Series 5 Test Description:
This 5th Series is a water triple with dead ducks. It is a walk-up. After the marks are retrieved there is a double blind, one through water and one on land. Both blinds are hot. This test will take about 7 minutes per dog.

The 5th and 6th Series had to be flip-flopped due to the wind making the test originally planned for today not feasible to run when planned. Therefore the new 5th Series was renamed "Clubhouse Rendezvous" - and the significance of the new name remains unknown at the present time.

Judge Jeff Bundy welcomed the handlers, congratulated those who had made it to the 5th Series, and gave the scenario. You are walking out to your duck hole heading towards a small island when some birds come in, which you shoot. So it's a walk-up.

Your duck hole is located in a shallow running water pond nestled in a grove of Eucalyptus trees. It holds some islands covered with dry grass. The pond is backdropped on two sides by raised berms, one of which has the clubhouse road on it. About 12 mallard decoys are placed in the pond close to the near shore. A spread of handsome full-body goose decoys is located on land on the right side of the pond.

After the test dogs had run traffic control was set up to stop cars from driving on the road when a dog was running.

The walk-up in this test goes around a tree after leaving the holding blind, so as to execute a tight left turn before the dog and handler begin heading towards a stripe of orange spray paint on the ground. By the time the dog arrives near the paint the walk-up bird should have been called for.

After the marks are retrieved, the right hand blind (land blind) is run first. The line to the blind goes through a corridor of skinny tree trunks and there is a small blind marker. The line to this blind is along a slight side slope with the level land on the left where the goose dekes are grazing and loafing. The land blind is at about 82 yards. This blind is planted from the right and is "hot."

The line to the left hand blind (water blind) goes through the shallow pond, first crossing the island where the walk-up bird has previously landed, then navigating past and across other land and flooded points before arriving on the far shore. It is planted at the base of a tree before the ground rises to reach the road. This blind is marked by an orange tape wrapped around the target tree trunk. It is planted from a holding blind near the road. An orange stripe has been spray painted on the ground about 15 feet to the left of where the dogs are sent from. The judges explain that if a handler need to cross this line to see their dog while handling on the water blind, it is "not good."​
​Series 5 Test Dogs:
Susan and Gamay ran first. Gamay pinned the go bird, and had short hunts on the two memory birds. She showed the handlers that they won't always see their dogs work during hunts. Gamay's land blind went smoothly, taking a good line through the corridor of trees. On her water blind (the water blind) she got to the right which put her out of sight and up on the road. The left-hand casts needed at this point were straight into the strong north wind.  Gamay eventually circled off to the right and in towards the island and then was picked up.

Julie and Bree ran second. Bree pinned the go bird. As Bree worked on her second retrieve, the middle bird, she, like Gamay, demonstrated that handlers could expect not to see their dogs during all of a hunt on this bird, since it's likely location would include the area behind the island where the bird had landed. Bree then made a quick retrieve of the walk-up bird on the left. On her land blind her initial line was too far to the left, perhaps influenced by the spread of goose decoys as well as some push off the side hill. A few right hand casts were needed to get Bree to the blind. On her water blind, Bree, like Gamay, wanted to pull off line to the right. Julie's casts put Bree back on line to recover the blind. Bree showed the handlers that if your dog is to the right the line to the blind, all you may see of it will be the splashes as it gallops through the shallow water.

Ed and Rye ran third. Rye pinned his go bird, which had landed with a splash due to the vagaries of throws in strong winds. When sent for the middle bird, Rye punched across the island (and therefore through the fall area) and crossed the pond. Ed handled back to the bird. Rye's line to her left hand bird was somewhat to the right of the fall and her nose located it immediately. Rye took a good initial line through the trees on her land blind, then started pulling to the left and casts to the right were needed. On her water blind it appeared Ed had spotted the perils of allowing a dog to gain the far shore prematurely as he cast several times to counteract its pull. Despite his effort the strong right hand influences on this blind nevertheless pulled Rye that way to a degree. ​


Wednesday, April 21, 2021:
Work on the 5th was strong overall although there were quite a few single handles. And although this was the least gallery-friendly of all the series so far, in terms of having a good view of the test, the gallery had a nice shady spot under the trees which surround this pond, known as the “Clubhouse Pond.”

The north wind continued all day, gradually lessening by late afternoon. This wind produced variability in the falls. The crosswind situation affected the work because dogs could wind the middle bird while hunting for the go bird. The middle bird with its obscure fall caused handles also.

The free-roaming chukkar on these grounds caused some stress when a covey wandered into the area of the land blind and added to the control challenge. But the dogs who ran in “covey conditions” for the most part demonstrated admirable control.

5TH SERIES COMPLETE –The 5th series is in the books. The final dog to run came off the line at about 5:25 pm. The 6th Series will start tomorrow (Thursday.)