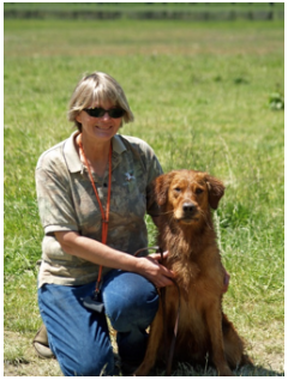 The second recipient of the annual John O. Blackbird Memorial Award is presented to a lady we feel truly represents the ideas, passion, compassion and other qualities emulated by the late John O. Blackbird.  The Master Amateur Retriever Club’s Board of Directors is pleased to honor Julie Cairns with this heartfelt, prestigious award.

Many hobbies and interests have come and gone in Julie’s life, but the one constant passion has been the love for her retrievers and field training.  Ever since she was a teenager, Julie has had golden retrievers and fate would step in the day she found herself with one that wanted to retriever ALL THE TIME.  She soon discovered a local retriever club and after a phone call and a club meeting she became involved in the Redwood Empire Retriever Club (RERC).  RERC was primarily made up of hunters who ran field trails on the side and with their encouragement she and her husband began hunting in the fall.

For some time now, Julie has served as a leader on the national stage.  She was also on the original Board of Directors of the Master National Retriever Club in 1991-92 when the name of the organization was selected and the By-Laws were drafted.  She served another stint on the MNRC Board in 2006 when she was President.For ten years she was the editor/publisher of the "Hunt Test Know How" newsletter, a publication to help improve the understanding of hunt test training, testing and judging.

She continues to be active with the RERC, as well as the NorCal Golden Retriever Club.

Over the years she has had many wonderful Goldens that she has trained and titled at all levels. Currently, she has a female black lab Master Hunter.

Julie retired a few years ago after 30 years with the U.S. Postal Service as a rural letter carrier.  She is a ceramic artist, does volunteer work in the community and enjoys her role as grandmother to her three-year-old grandson.
In Memory of John O. Blackbird
Online Nomination Form
John O. Blackbird Memorial Award Nomination Form (Download to print and submit)
​•    ​•    ​•    ​•    ​•
If you would like to mail the form, please print and submit to your regional officer.