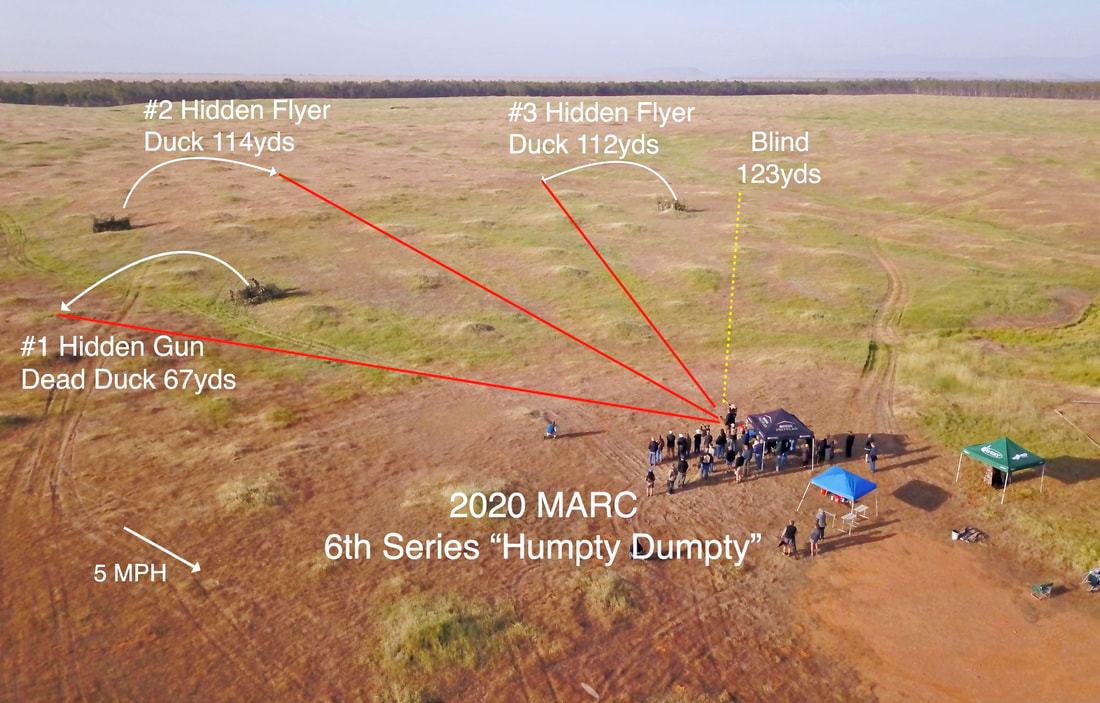 Series 6 Test Description:
The scenario is a pheasant hunt (ducks to be shot). The test is set in an area known as the "rifle range" and consists of rolling hills covered with short grass and dotted with numerous mogul-like grass-covered mounds.

Two brushed up blinds are almost in line with each other, the closer one launches a dead duck to the left in a long arc across a swale containing fresh ATV tracks. This bird lands in short cover on the open hillside. The second, more distant holding blind flights a mallard to the right. It lands among moguls. The third station, well off to the right, flights and shoots another mallard to the left. It also lands among some grassy moguls.

After this triple has been retrieved, a single blind is run. This blind is off the back of the right hand flier station. There will be a diversion shot from that station as the dog returns with its flier, after which the blind will be planted from that station before the dog has arrived at the line.
Series 6 Test Dogs:
Gamay ran first. She made quick work of her go bird, the flier on the right. Sent for the dead bird second, she pulled towards its holding blind and then hunted the swale with the ATV tracks, gradually working towards the deeper flier station. Susan handled her back to the fall. When sent for the final flier, Gamay took a line under its arc, then hunted the backside of the flier station and into the swale again, at which point Susan handled her. Gallery assistance was needed to help Susan locate the fall of this bird, demonstrating that handlers need to watch their own falls carefully in case a handle is needed.

Gamay took a somewhat wide line to her blind and then was handled across the line to be in line with the throwing station, and from there to the bird.

Bree ran second. Bree pinned her go bird (flier) and dead bird (on the left). When sent for the flier from the station behind the short station, she crossed left across the ATV tracks in the swale then back to her bird.

On her blind Bree took an initial line somewhat to the right of the line to the bird. She responded to her first two casts by heading more to the right, then spotted the blind marker from a distance and recovered her bird.

Rye ran third. Rye pinned her go bird flier. She was sent for the other flier second, and managed to stay just to the right of its throwing station then headed up the hill to pin this bird. Rye demonstrated - as did the other test dogs - that all three dogs experienced a lot of suction to the left when heading for this bird. Rye was sent for the dead bird third. She had a loose hunt well to the left of it and was handled to the bird.

On her blind, Rue's initial line was somewhat to the left of the holding blind (i.e., towards the flier). She responded quickly to casts to put her on the correct side and back to the blind.

After the test dogs ran, a gunner from this station walked out on the side where  the blind would be planted, and headed away from the test, showing the gallery that the rolling terrain in this area falls off quickly just beyond where the blind is planted. Not a good blind to overrun.

Thursday, April 22, 2021:
It's Thursday morning and the 6th and final series of the 2020 Master Amateur - which has been held in 2021 due to the pandemic. As the buzzing drone rises overhead to create a permanent record of the test, Judge Jeff Bundy welcomes handlers to the 6th, saying that the judges have had fun and they hope the handlers have too. He cautions that there are some teams who will very need strong work on this test to earn a plate - not everyone will necessarily be getting one. Judge Ray Shanks interjects, "Oh but I think they all should!" and Bundy responds, "Hey, Ray told me to say that."
​
It is a few minutes before noon here and there are eight dogs left to run the 6th series. Average time is about 5 1/2 minutes per dog.

The work on the 6th was generally solid, particularly on the marks. More teams seemed to have trouble on the single blind than on the marks. After the dog delivered its final bird the judges were usually able to let its handler know at the line whether their dog had qualified and, if not, the reason for the unfortunate outcome.

The final dog completed the 6th Series at 12:45 p.m. The group headed for the Clear Creek clubhouse to await the awards ceremony. Back at the clubhouse the handlers found munchies available as they gathered to sign the 2020 MAI banner, a MARC tradition. The waiting handlers were also invited to raid a stash of remaining MAI logo items. Which they did.