<<Back to Flight A

​The judges selected another beautiful area of the Beaver Pond to run the final series of the 2021 Master Amateur Invitational for Flight A. This Water Triple with Flyer and two blinds (one water and one land) is right in the middle of Area 3. This morning started with temperatures in the mid 50s and by midday, it had reached 86 degrees. The dew point remains low keeping the humidity unseasonably low for this area.

The handler and dog take their place very close to the edge of the bank. After having 59 re-heels over the course of the first 5 series, the judges believe “if the dog creeps on this test, they will tumble into the water and that will be considered a break”. With 29 dogs remaining to run, one dog “tumbled.”

The flyer station is located across the channel to the left. The line to the flyer is into the water, down the short channel to an angle out and then another 30 yards on land to the flyer. The flyer is being shot to the left landing approximately 83 yards from the line. The second and third bird thrown is a “mom and pop” (two birds being thrown in the opposite direction from the same gun station). The gun station is located directly in front of the line across a channel. “Mom,” the middle bird, is thrown to the left and lands at 35 yards on the peninsula elbow in heavy cover. “Pop,”  the go-bird, is thrown to the right and lands on the backside of the peninsula in the water with a splash. It lands 28 yards from the line. After returning from the right hand bird, dogs are evenly selecting between the flyer and middle bird to pick up second.

No matter what order they decide on, a diversion shot is given as the dog returns from the middle bird. The judges have instructed the handlers to run the water blind and then the land blind. The line to the water blind is nearly the same as the line to the flyer – just slightly to the right and under the arc. The blind is being placed at the base of a pine tree at 92 yards.

To run the land blind, the handler steps a couple feet to the left, away from the water’s edge. This land blind, the final bird for the dog to retrieve in this Master Amateur Invitational, is being placed 67 yards from the line. Medium tall grass covers the ground between the line and the bird.

This test is averaging 9 minutes per dog. 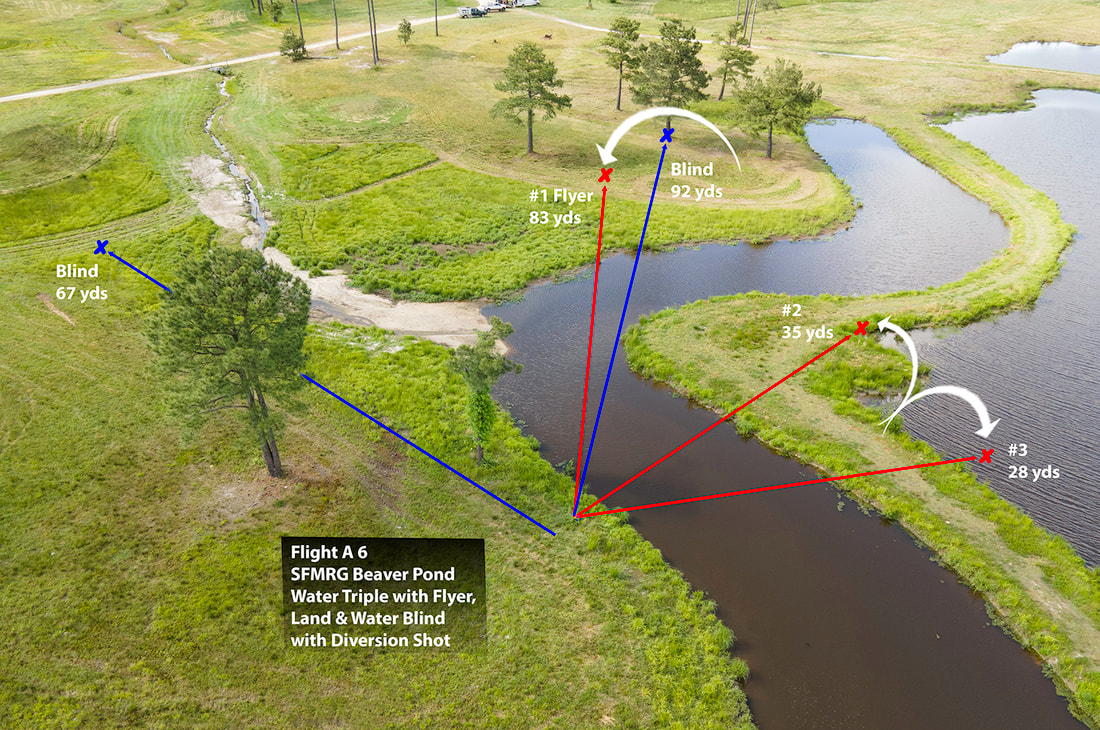