Recent News: MARC is Officially Approved as an AKC Club!

The Club has obtained its license from the AKC. The Inaugural Invitational event will be in the eastern region in the Spring of 2017. The Master Amateur Invitational will be open to all dogs who, when handled by an amateur, have passed six or more AKC Master hunt tests during the qualifying period of March 1, 2016 and February 28, 2017.
​
Full qualifying details can be found Here. (in the HOW IT WORKS tab) 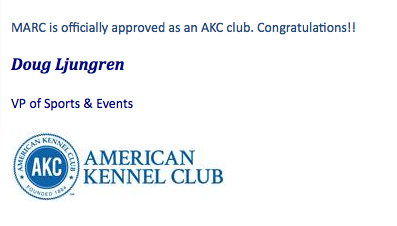 From the Master National Board of Directors  -   would like to Congratulate the independent Master Amateur Retriever Club on receiving recognition and approval from the American Kennel Club as the newest National Retriever Club...
From John Stracka, President and Editor-in-Chief of Retriever News:
It's been a joy to watch history unfold. You have truly created something special with the formation of the Master Amateur Retriever Club. Has it struck you yet how profound the effort really is to the community?

It has just been special to watch. Here's partly why – I was entrusted with saving the original notes, letters and polls hand written and "typed" from 1955 to 1957, forming the National Amateur Retriever Club – it took 3 years of letter writing and was a huge undertaking. Not at all accepted – scorned, laughed at by some of the biggest names in the games from the era. The original by-laws are on onion skin paper, carbon copies of state filings, hand written letters (some hate mail) – makes me just feel awe at the history and now to see MARC happen. These papers have been saved by various folks and passed along for 60 years. Then few years ago the original 16 millimeter film of that first 1957 National Amateur Championship event was found in the trash in the Chicago area. It had been made by John Olin, the munitions manufacturing mogul – and it found its way to me via Ebay by complete chance or it would have vanished. I had it turned into 1,000 DVD's and gave away hundreds so the event would never be lost again. The event is quite entertaining if you haven't seen the film. It is just an amazing contrast how things happened then and now – you all are part of it. We forget we are making history every day.

We have to work to hard preserve our history – and now you have created it. The crew at Retriever News pledges to continue to help preserve the next 25 years of AKC retriever field sports ... and once again to each of you a hearty congratulations – you have made history! Retriever News has 25 years of history for the Master National in its archives and I look forward to 25 years of Master Amateur Retriever Club history being recorded as well! Cheers!