Western Region VP Laura Judd called the meeting to order at approximately 3:45 p.m. She explained the late start time was due to the previous group that used this meeting room running hours over their scheduled time. However the MAI workers set up the room quickly and the assembled MAI folks were able to begin filing into the meeting room at 3:30 p.m. and escape the afternoon heat - heat which reached 84 degrees today. Temps for tomorrow, the first day of testing, are predicted to be a somewhat higher.

Laura thanked her co-chair, Western Region Director Ted de Looze and his wife Lezlee, West Central Region VP Dave Christianson and his wife Vicki (2020 MAI Test Secretary), Julie Cairns who prepared the Training Grounds Guide and was also serving as hostess, and many others for their help in making the 2020 MAI a reality.

Ted de Looze presented information on how the COVID-19 pandemic was affecting the State of California as well as Tehama County where the MAI is being held. He informed the group that Casino rules strictly required masking any time inside one of the Casino buildings. He stated there would be 3 test dogs so that the size of the group at the line to watch a test dog could be smaller than all handlers being there at the same time. [The test dog handlers will be Julie Cairns, Ed Ryska, and Susan Bell.] Ted informed the group that California recently announced new guidelines for gatherings for sporting events and the MAI qualified under the new rules. He said that in his opinion a 10 mph wind in an outdoor venue was as good as 30 - 40 feet of separation between people for protecting from COVID transmission.

Jace Tramontin presented the John Blackbird Memorial Award. Jace first described the background of this award - which honors the memory of John Blackbird. Jace explained that the qualities looked for in the annual recipient of this award were intended to mirror John's qualities as an amateur trainer, a worker for his local retriever clubs, and a mentor of other amateurs. Jace then announced the winner of the award this year - Julie Cairns - and described Julie's extensive accomplishments as an amateur participant and judge in this sport, including 10 years of publishing a magazine, "Hunt Test Know How," to advance the hunt test sport and educate amateur trainers. 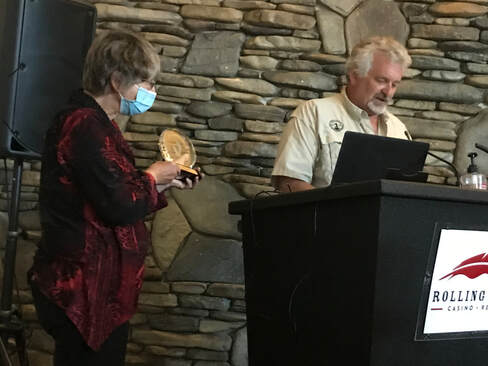 Jace Tramontin announces winner of the John Blackbird memorial award - Julie Cairnes.
Russ Reavis, representing the American Kennel Club, made remarks. Highlights:
(1) The new amateur handler set-aside reserving 25% or 35% of the entries in limited Master stakes for amateur-handled dogs has been implemented. All clubs applying after April 1st to hold a limited Master stake will be under this rule. Entries appearing on Entry Express will reflect how that dog was entered: Under  the worker set-aside, the amateur set-aside, or as a general entry.

(2) Starting either August 1 or September 1, clubs will have the ability to move a waitlisted Master entry off the waitlist AFTER closing of entries so that waitlisted dog can run in the event. This will mean that scratches after closing will no longer automatically "waste" a Master spot. Russ stated this is one of the several ways  AKC is working to address the fact that the demand for space in Master stakes is exceeding supply.

(3) Discussions are ongoing at the AKC level on whether to limit Junior and Senior stakes as well as Master. The concern is with hardship on small clubs when Junior or Senior stakes experience large entries.

(4) Discussions are ongoing at the AKC level over problems encountered by shortages of live birds and ammunition. Russ stated that "potentially" the AKC can waive a live bird requirement for a particular event.

(5) There has been a recent rash of misconduct situations involving handlers "getting in judges' faces." Russ commented that these are serious charges and stem from people becoming emotional. He said that handlers need to keep their cool and remember to "walk away" from situations rather than confront judges.

(6) The members who will be serving on the Retriever Hunt Test Advisory Committee were announced. Each of the regions are represented. 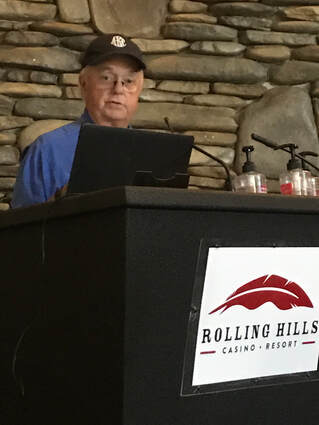 Russ Reavis gives the AKC update.
Dave Christianson made remarks. Dave thanked the judges and workers for their hard work during set-up week when tests are designed. He said everyone was great to work with. He presented an award to Laura Judd from the MARC Board that expresses the Board's thanks to Laura for her years of work and dedication to the Master Amateur event and its organization. Dave then announced the results of the recent MARC election of Officers and Directors, including Rhonda Reed (Western Region), Jeff Bundy (West Central Region), and Mark Frederick (East Region). Dave invited all participants in the sport to feel free to email him with their ideas and give input on what they wanted to see.

Dave then presided over the drawing of the first running dog for the 2020 MAI. Lucky number 52 won this distinction. #52 is Acedo's Maya, handled by Maribel Acedo. Maribel was presented with a signature hand-crafted handler's line gun created by Ray Kaufman. 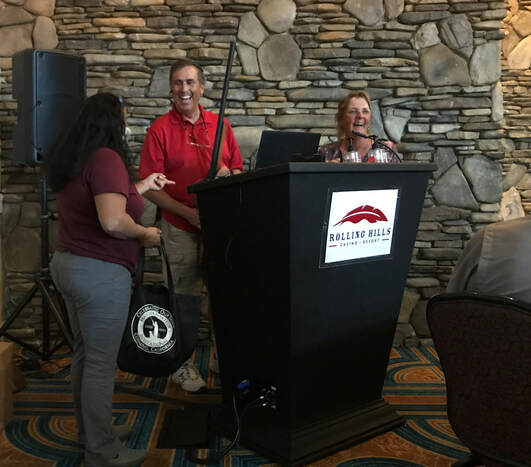 Laura and Dave Christianson give the handler of first running dog her prize - a signature Ray Kaufman handlers gun.
Laura Judd then called on handlers of dogs who would have been able to run the 2020 MAI if it really had been held in 2020 (instead of being postponed because of the pandemic) but were not able to run this year due to advancing age or infirmity or other reasons. She invited these handlers to give the names of their dogs who had qualified for the MAI but had to retire without running the event. At least seven dogs were thus honored. It was an emotional moment.

Laura then presented some procedures for the event. Highlights:
(1) Jace Tramontin is the traffic coordinator. What Jace says GOES when it comes to parking and traffic.

(2) There will be wading pools with water to keep dogs cool.

(3) The plan is to hold one series per day. There is no rush as there is plenty of time. On Tuesday testing will stop at 4 p.m. for festivities - which will again be held at the Carlino Room.

(4) Bitch check will open at 6:30 a.m. each day of the event. Bitches must be checked each day. Katie Quarles, DVM, is the official veterinarian for bitch check. Katie then spoke to the group and announced the bitch check location ("at the speed bump") and stated that if handlers had proof of spaying they should bring it to the first bitch check and avoid the need for further checking.

(7) All handlers are expected to help out by volunteering for work on a committee. Laura directed handlers to the volunteer coordinator Dave Markham. (Handlers could select a job or spin the colorful roulette style wheel which had been adapted with the names of the many jobs needed to keep a national event like the MAI going!)

(8) Laura reminded throwers and gunners to bring their own duck calls.

(9) There will be no group text process to distribute MAI information to handlers at this event (as previously planned). The group text program self-destructed due to inclusion of the word "bitch" (referring to the bitch check) in one of the texts. This machine-misinterpreted "B-word" caused the texting program to crash.

(10) There are ticks and foxtails (dried grass seed heads with awns that endanger dogs) on these grounds, especially along road edges and around parking lots, so be careful.

(11) Handlers and gallery must remain in the venue of completed testing until the marshals notify the group it is released to move to the next venue.

(12) Workers will not be supplied with lunches.

(13) Do not directly contact judges about why you were dropped. These inquiries must go through Rhonda Reed.

(14) Workers should meet with their committee chairs after dinner at one of the dinner tables.

The job selector for indecisive volunteers.
Laura then introduced the judges, Jeff Bundy and Ray Shanks. Jeff gave the judges' briefing:
(A) Handlers must have three points of contact on the line gun. In other words, be sure to shoulder the gun.

(B) On a walk-up, keep walking until the bird is in the air.

(C) If you handle on a mark, be sure to handle all the way to the bird.

(D) Challenge the line to the blind.

(E) Set your birds on a bucket after taking delivery. The judge will get the bird off the bucket.

(F) Put your line gun in the gun stand. Guns will be sanitized between handlers. ​

Laura gives judges their gifts.
Lastly a prize was awarded to the handler who had driven the farthest to attend the 2020 MAI. This was won by Scott Baker of North Carolina. Congratulations Scott!

Dinner, Auction and Raffle.
The meeting then adjourned for dinner, also served in the Carlino room. Following a tasty catered dinner a live auction was conducted by auctioneer Brook Douglas and the raffle winners were drawn for the many raffle prizes. Other games of chance included drawing a number (in this case 33) and the handler of the 33rd dog to enter the event won a valuable prize. ​​​